It seemed like a good idea at the time. Ever have an inspiration that seems to be the best idea you ever had, only to “re-think” it later? Ever move on that idea and make it public and then reconsider? Are you surprised that it has actually happened to me once or twice (or more)?

Earlier this year in the spring, we seized the opportunity to participate in the Tyler Wine Swirl. Late in the scheduling, a tasting table became open for a winery and we were happy to accept the invitation. Thanks to Marnelle Durrette (Kiepersol) and Dawn Leatherwood (Pella Legna) for thinking of us!

M6 was then assigned a location. Each winery was “paired” with an eatery. M6 was paired with SmallCakes. SmallCakes is a cupcakery. John and Becky Reiss have the local franchise in Tyler and would be our neighbor at the swirl. Anne contacted them and discussed doing “market research” to see if any of our wines paired well with any of their cakes. I met John at M6 one afternoon when the tasting room was closed. After introductions, we sat down for some serious business.

It was very serious, right? Who am I kidding? We had a blast! John brought several varieties, but only a small sampling of their menu. (You have to visit their store on Old Bullard Rd in Tyler to experience the sheer delight!) We tasted his wedding cake first. I then chose a sweet wine to match and then another. The first was ok, but then the second was better! Hey, we were on to something. We repeated this process for several samples. After that I don’t remember much. Sugar, sugar, sugar!

Anne found out about the fun we were having and broke land speed records to get here. She hates to be left out of anything FUN. She samples what we recommended and concurred. It was official, M6 and SmallCakes paired well together! It was then that I announced that this would be our inaugural pairing event at M6! I had spoken! So be it! Amen!

The swirl was a lot of fun being next to John and Becky and meeting so many nice folks. SmallCakes and M6 made a good team.

Anne is not one to let me forget about things I say. She reminded me regularly about the pairing event. Uneeta plan it. Ugotta set the date. Weneeta create the event. (refer to the Anita’s imaginary family blog if you don’t recognize these words). After a few weeks, the plan was in concrete. We were doing it whether it was a good idea or not! Now was a heck of a time to actually think through the details. 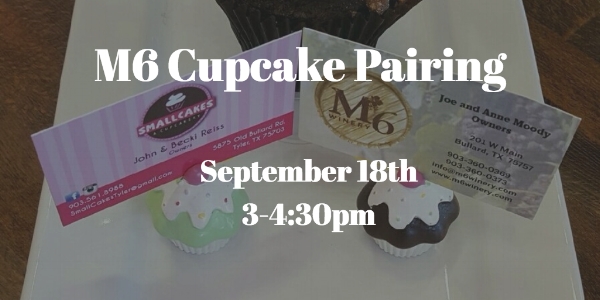 I was familiar with pairing wine and savory foods. Also pairing with chocolate. However, pairing wine with sweets is a daunting task. If the food is sweeter than the wine, the wine will taste flabby or overly tart. What was I doing! What is sweeter than cupcake icing? Was the research flawed? Was I setting up to make M6 wine look awful?!?! Like I said. Now was a heck of a time to plan it out.

The event was held and in spite of ourselves, everything went very well. Many people expressed their skepticism and did not participate, others came and were pleasantly surprised. It was a very nice way to spend a Sunday afternoon with wine, cake and friends; new and old.

We ended with a sampling of our next pairing event; wine and cheese! Cheese is a much more traditional pairing event. And we gave a "teaser" that afternoon with an aged Asiago and our newly bottled Cabernet Sauvignon from Lodi, CA. 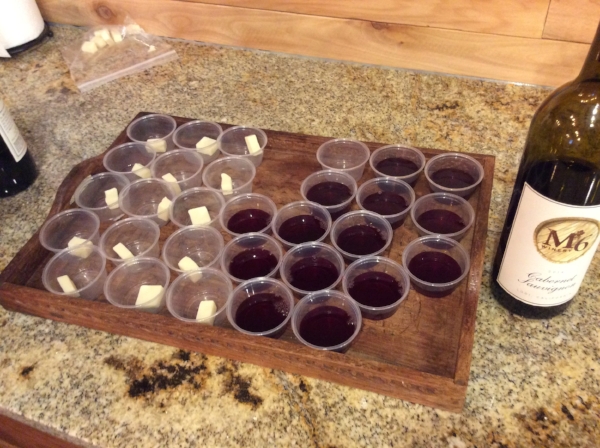 Watch for the details upcoming.

Two years ago I decided to change my lifestyle for healthier living. In other words, I needed to lose weight. Since then, I have been conscious about what I eat. It is not much fun, but I am doing it. Losing 50 pounds takes a lot longer than gaining it. I mention this to explain in advance that I did not partake of the cupcakes during the whole pairing. I was proud of myself!

I tend to over plan and we had cupcakes left over. It is better than running out. We cleaned up and relaxed. Anne and I had a private pairing and shared the mini SmallCakes. They were delicious as always! Still proud. It was just a small bite of each. Anne left for home (I thought) and I stayed back to finish up.

One of my many shortcomings is that I am not disciplined enough to eat a small amount of anything. It is much easier for me to abstain completely than to “just have a bite”. Anne and I shared “just a bite” of each cake and it was nagging at me. I was to bring home the leftovers. I decided to have “just one more”. Things escalated. I heard a noise just in time to face a camera with the proof of my actions. 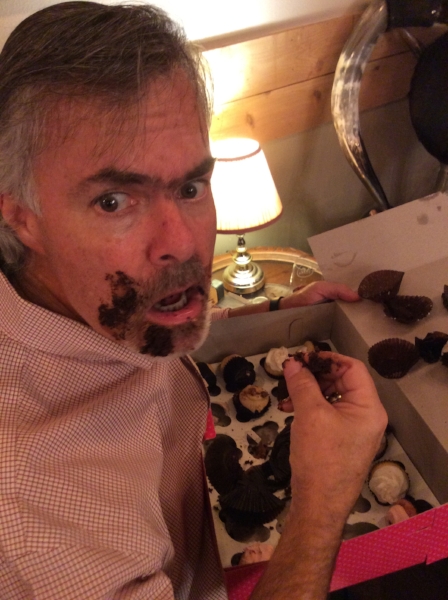